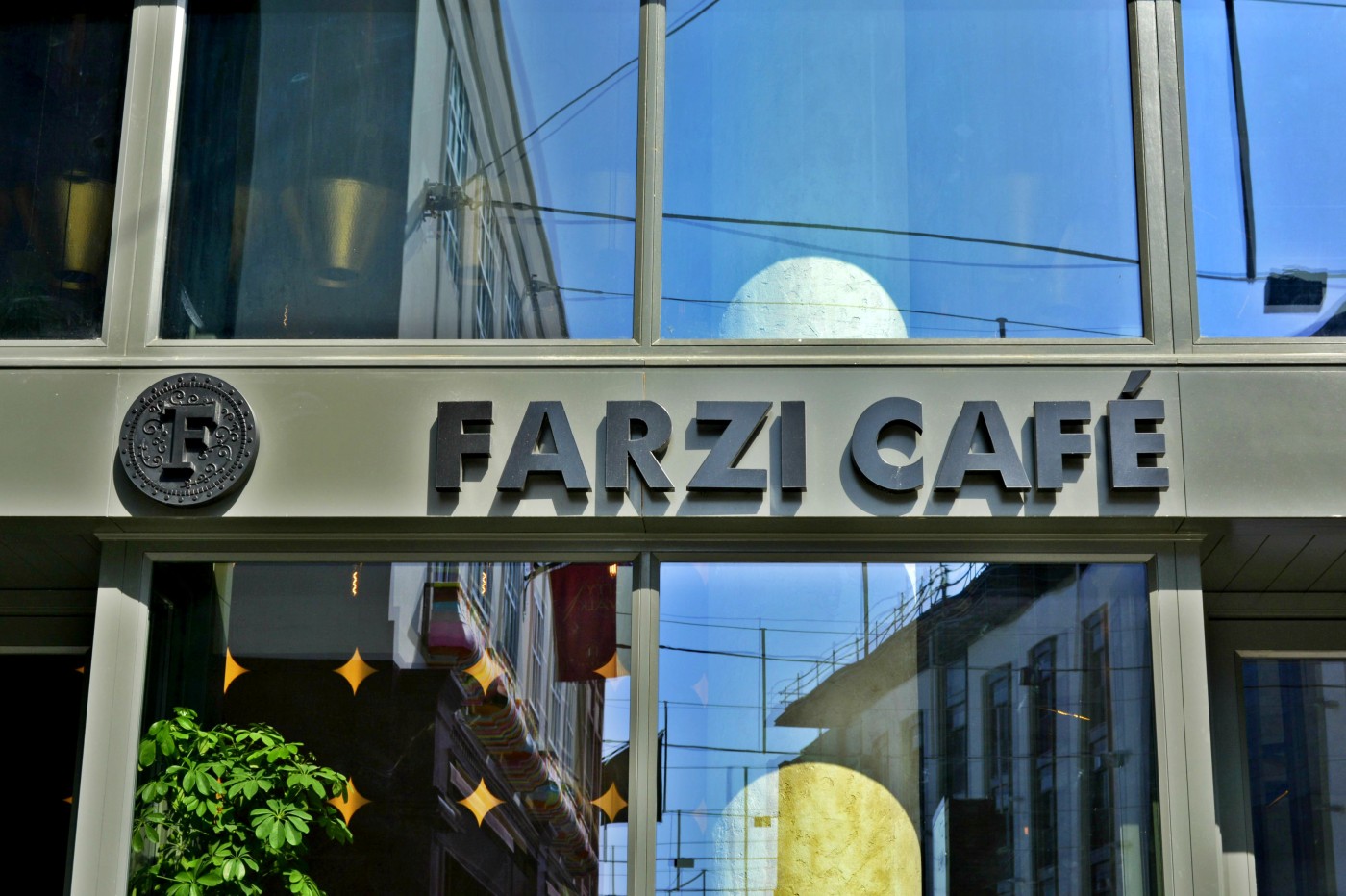 Farzi Cafe was on our RADAR since quite some time but due to our busy schedules, we just couldn’t take out the time to try it out. But thanks to a foodie friend who recommended our name to the PR manager. After much anticipation, the day finally arrived when I saw an invite from Farzi in my inbox. My eyes popped and jaw dropped (literally). Suddenly there was a strange feeling of accomplishment as if I had graduated and this time with distinction.

Farzi is a Persian word which means ‘Illusion on the table’. Farzi Cafe does total justice to the word in every possible way that one can think of. It claims to serve Indian food with a twist and what a gastronomical twist it is. We chose to go there for lunch on a Friday afternoon and the place was Jam packed and people waiting in line.

Although I have been to quite a few restaurants with a gastronomical performance but at Farzi I was mesmerized with the visual artistry that was performed on my table. It’s an experience that I cannot define in words. You have to go there once to get Farzified. The presentation of each dish is outstanding. 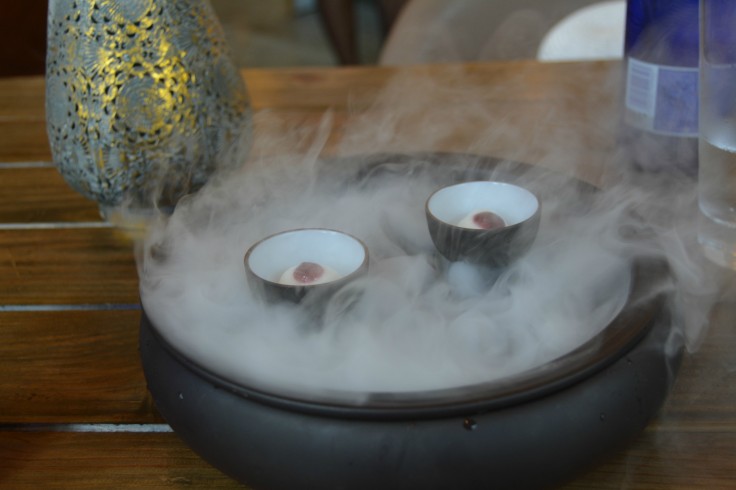 For starters we were served Amuse Bouche, which tasted as unique as its name. It was a yogurt ball with berry twist on top that you had to drink in one shot from the bowl itself. It surely was pretty amusing as it was served in a platter which was bubbling clouds in the air, made up of dry ice. It bursts inside your mouth and tasted so good. 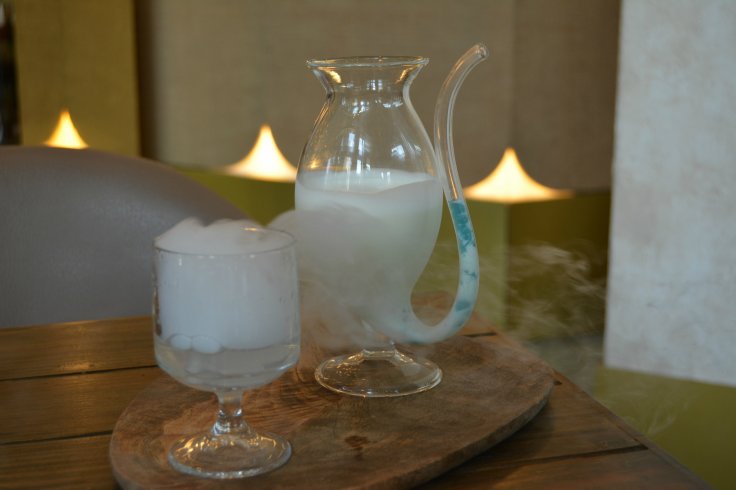 For drinks they served us their version of pina colada which they called Ananas Orbits. It had small pina colada flavoured caviar which made this drink so unique and interesting. Again it was served in a super cute furnace along with a dry ice bowl to add a little drama. 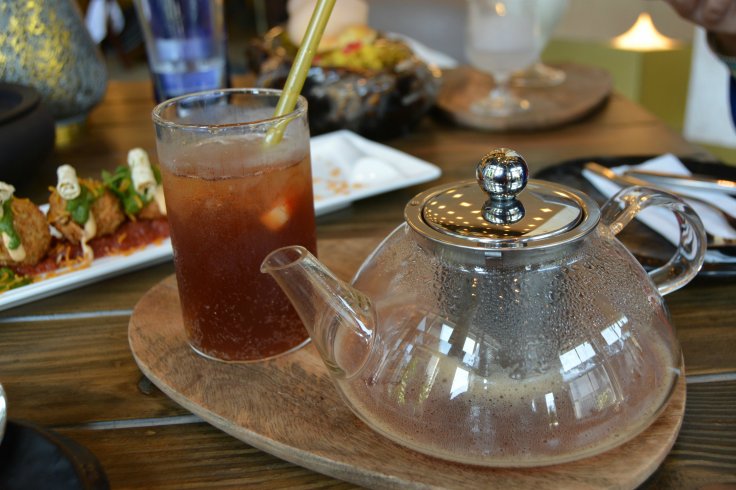 Mr. A got the Ice tea which was refreshing, sweet and tangy. 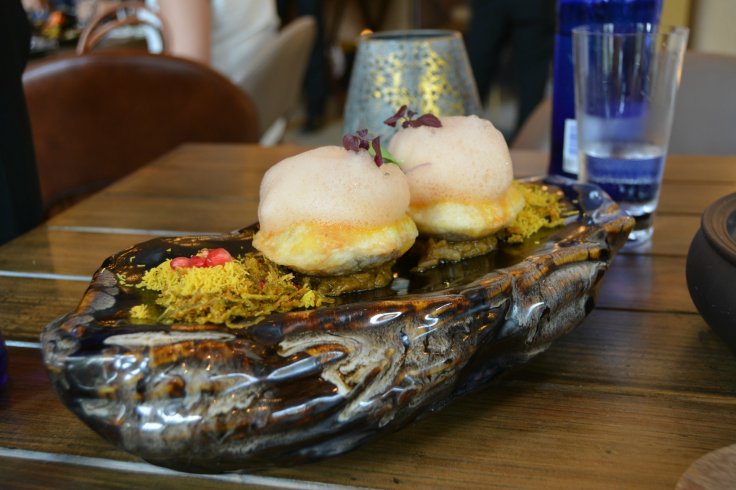 Then we had Raj Kachori which was beautifully presented, topped with tamarind sauce in the form of foam. It tasted divine and left us wishing for more. 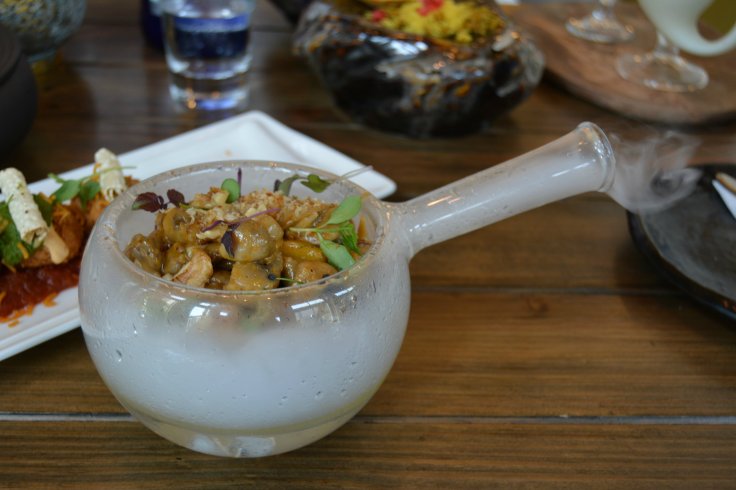 The Wild Mushrooms was the best mushroom dish that I have ever had in any Indian restaurant. It was creamy and spicy. Its taste still lingers on my mind. I have to go back to satisfy my taste buds. We finished it within minutes. The gastronomy made it look very fascinating and tempting. 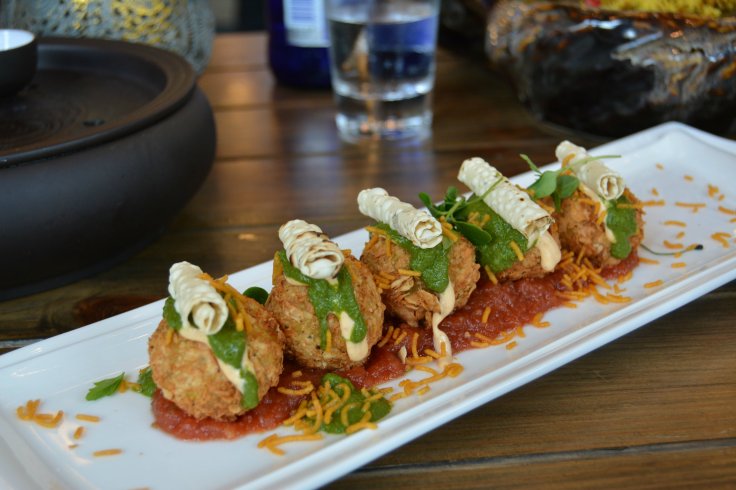 Then we had the Dal Chawal Arancini which was an Indian take on Italian Arincini which is made with risotto and cheese. The presentation was nothing less than any international dish. However Mr A. was quick to point out to the chef that the tomato sauce served with it was sweet and did not compliment the dish. 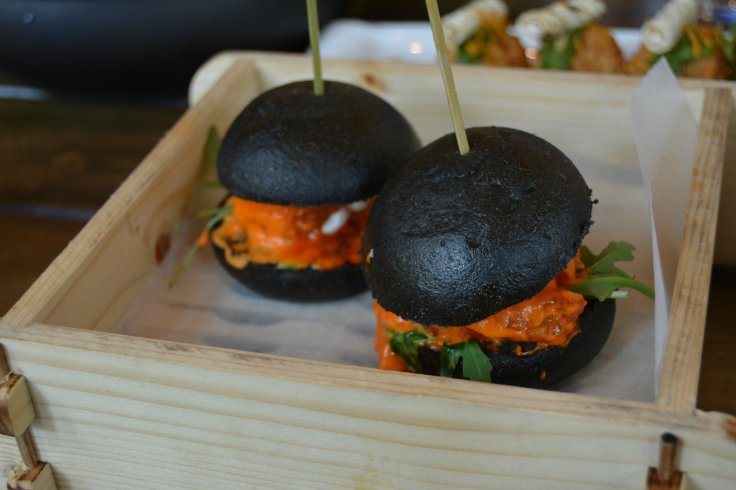 The Shrimp dynamite burgers were equivalent to a piece of art. The colors looked spectacular and the fact that the bun was made dyed with Cuttlefish ink made it even more desirable. The bun tasted like any other bun though. They were not just a visual treat, but they tasted delicious. The dynamite shrimp filling in side the bun was spicy and so flavorful. 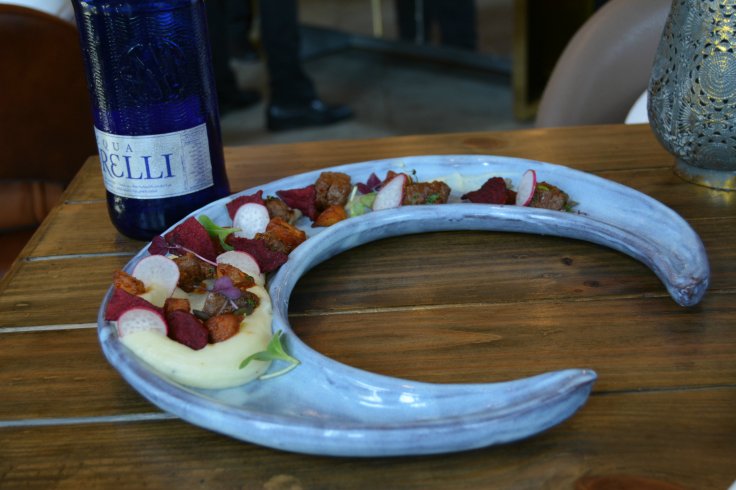 The Deconstructed Shepard’s Pie was a showstopper for me. It was served in a crescent-shaped platter. The twist here was that the shepherd’s pie wasn’t in layers form. It was rather in a uniquely deconstructed form. There was mashed potato along with beef tikka pieces which were tender and juicy and some crispy beetroot chips which took this dish to a whole new level. Simply loved it! The only complaint I have is that the portion size was insufficient for two. 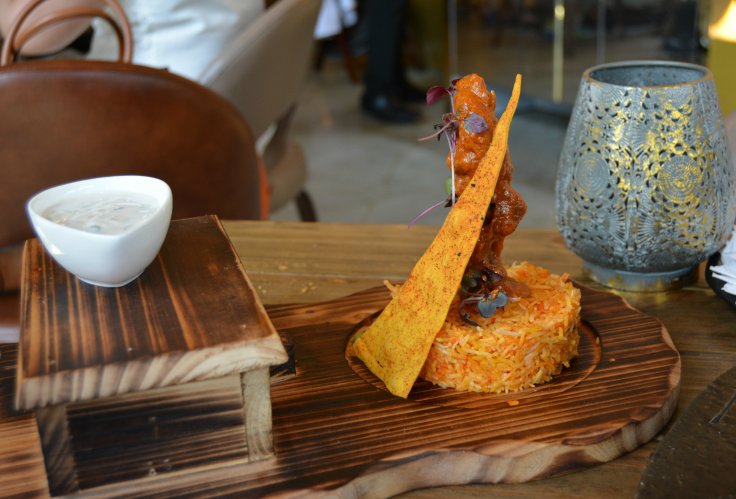 The shawarma biryani tasted unique and succulent and its presentation was again a visual delight.  It was served with a traditional raita which complimented it even more. 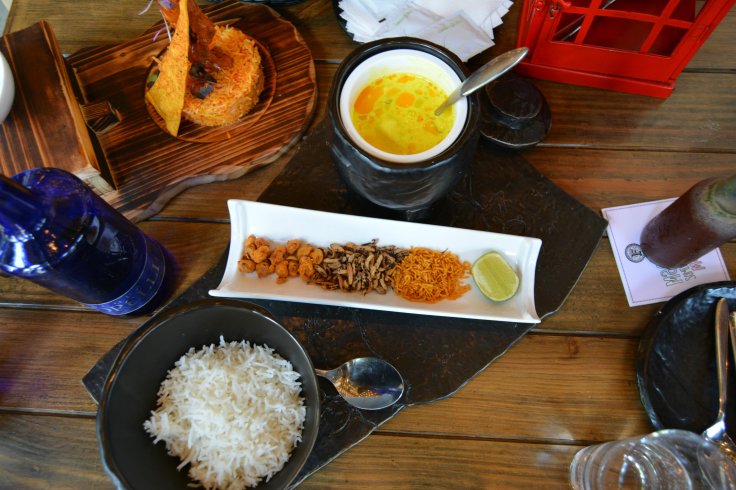 We also got served Khow Suey on a huge platter. A Burmese delicacy bursting with authentic flavors. Khow suey is a vegetarian meal with veggies cooked in coconut milk and garnished with peanuts and other crunchy bits. It was served with white rice. 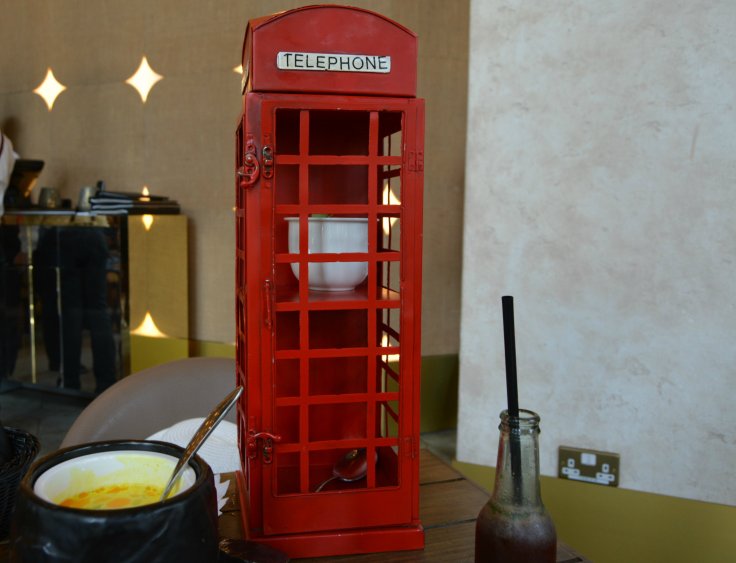 The chicken tikka masala was served in a super cute mini phone booth. It was rich and creamy in taste. However the quantity served was very small. It was served with butter naan. 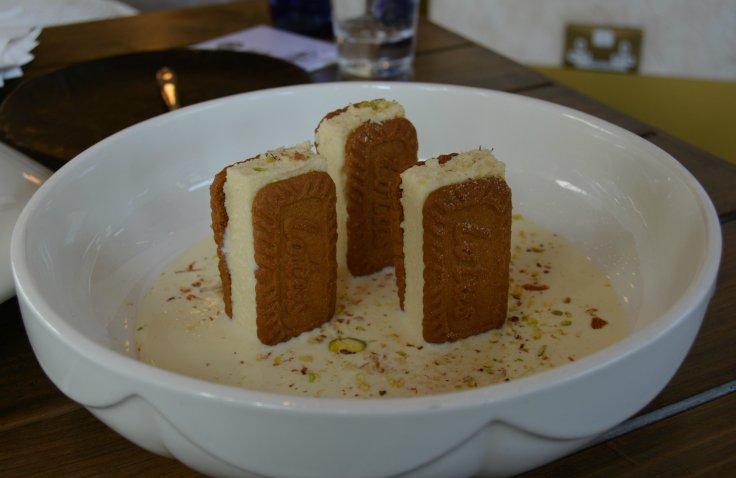 The desserts were also presented in a very unique and artistic way. Unfortunately the Lotus cheesecake with a desi touch failed to impress our taste buds. The cheese filling inside the lotus biscuits tasted a bit sour, that’s why it was a turn off. 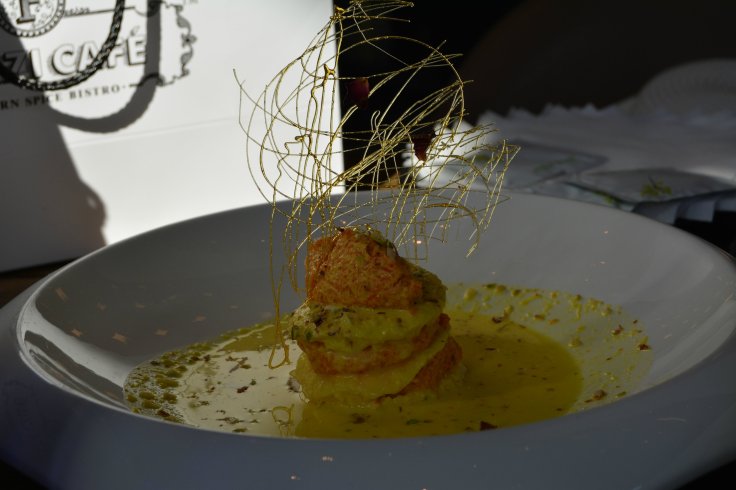 The ras malai was also presented in a very artistic way. The ras malai was made up of saffron and carrots. However it didn’t taste as good as it looked. They do have a lot more variety of desserts, unfortunately both of them were not to our liking. 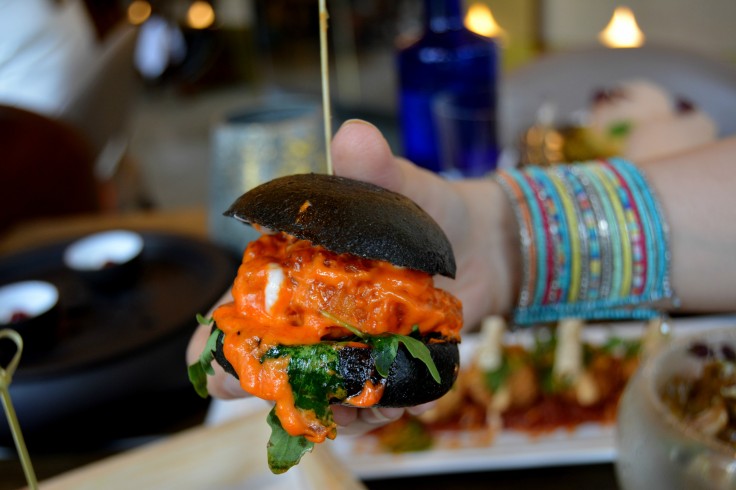 I would like to point out that Farzi Cafe is NOT a pricey place as it’s not fine dining. It is reasonable and has plenty of dishes. However the potions are small for most of the dishes. Farzi Cafe is a must try and highly recommended…So do get Farzified !!