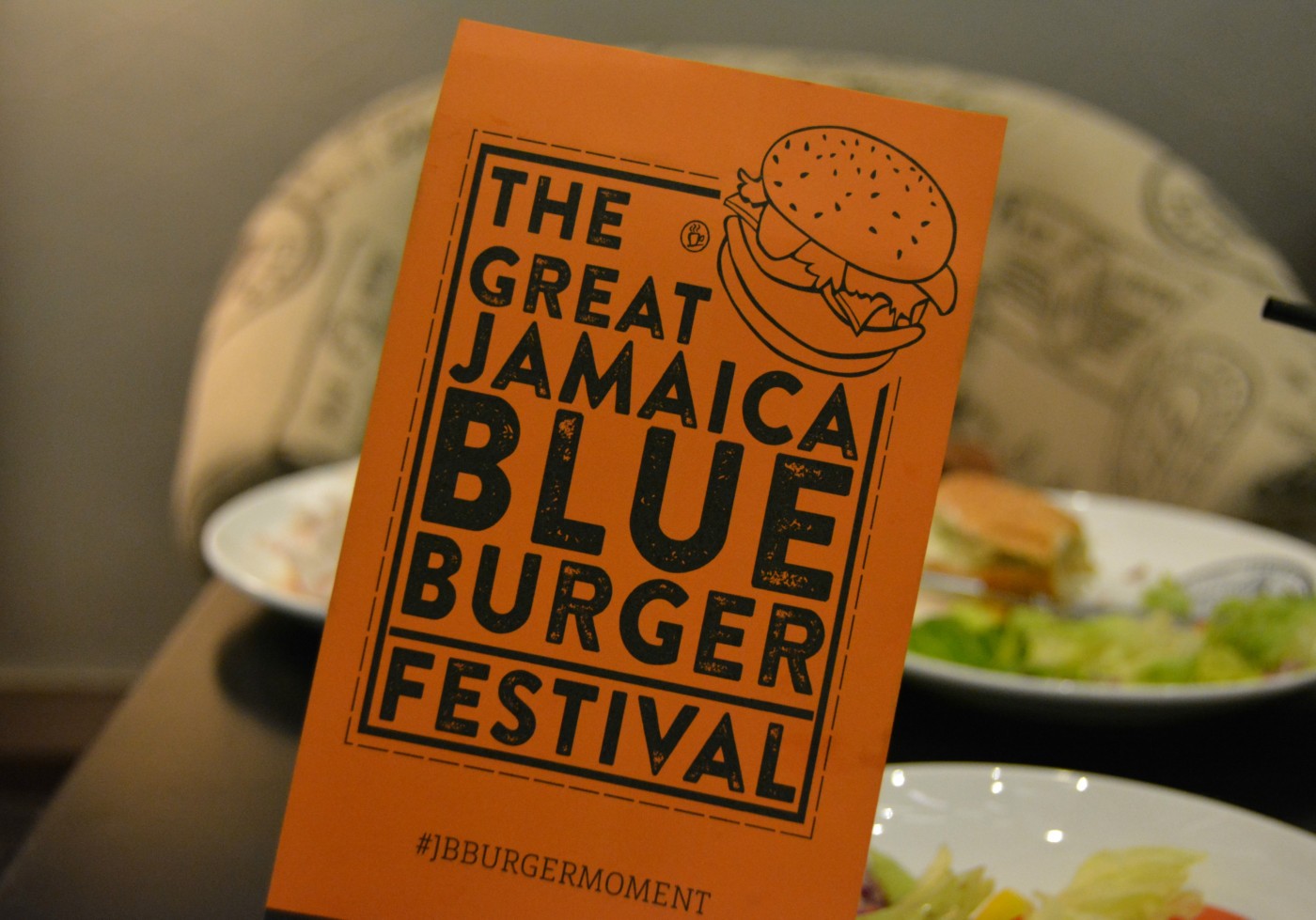 Ever since I started food blogging, I never got a chance to review burgers. To my surprise, I got an invite to taste “The Great Jamaica Blue Burger Festival”. We chose to go there for dinner on a week day.

Starting 7th April, The Great Jamaica Blue Burger Festival will be held every month in all Jamaica Blue outlets as part of The Great Jamaica Blue Food Festival that will run for a period of 12 months. Recently voted as a UAE ‘Superbrand’, this reputed Australian chain is famous for it’s single origin coffee from the Blue Mountains of Jamaica, and freshly served gourmet dishes.

The interior of Jamaica Blue was fascinating. The ceilings were really REALLY high. There was a beautiful shimmering Silver curtain on one side. The whole place was bright and furniture set neatly. The sofa chairs were very comfortable and the counters lit up.

We ordered our smoothies: Creamy berry and Banana, Honey and Cinnamon. But the solo server was swamped with orders and he got us two Creamy berry instead. He apologized and bought the Banana later on.

Both the drinks were delicious. The cinnamon was a nice touch to the Banana smoothie and I guess i will be adding some when I make one at home.

We had a lot of variety on the menu and tough choices to make ahead!

First up we ordered the Chicken & Vegetable Lasagna. It came with a side of salad. The Lasagna was saucy and there was no excess cheese which seemed healthy.

The steak sandwich was in a flat bread which was toasted. The steak meat was tender and had some beetroot in it. Not sure if there was any sauce inside but it tasted pretty good. It came with a side of Salad.

We also tried the Wasabi Chicken Burger which was recommended by the server. The wasabi was a little strong for my taste but the Wasabi lovers might enjoy it. I don’t like the fact all the dishes came with a side of same salad. If it’s a Burger Festival..Then fries are a MUST.

As the name suggests Peri Peri Chicken Burger was lathered in Peri Peri sauce along with cucumbers, tomatoes and lettuce. The chicken was a bit hard. It may have been over cooked. Again..It came with a side of Salad. If they wanted to keep it healthy, I wouldn’t mind grilled potato wedges.

After finishing the meal we had to try their World famous Coffees. They serve 3 kind of Coffees: Signature, Organic and Blue Mountain. The former two were priced averagely around AED 18 but the Blue Mountain was AED 42.

So here are some facts I came across while researching what Jamaica Blue Mountain Coffee is and why it was so pricey:

Mr. A ordered the Mocha Blue Mountain Coffee and a Carrot Cake. He states Mocha was outstanding and probably one of the best he has ever had. The Carrot cake blew us away. It was filled with raisins and walnuts. The cream cheese icing was perfect.

I had a Caramel Jamaica Blue Mountain Latte with Hazelnut flavor. I couldn’t taste the hazelnut flavor though. Chocolate Fudge brownie was delightful with hazelnuts in every bite.

I would like to point out that there was only one server in the Cafe but hats off to him for giving us full service and attending 10-12 odd people who followed after us. In fact he was the only one taking orders, making the cold and hot drinks and running to the kitchen to make the food and then serving it.

Few customers came in and left as well as there was no one present. So no idea what happened to the rest of the staff but they showed up when we were leaving. I would like to thank Mr. Edgardo for being so efficient and handling the situation.

Jamaica Blue at the Hyatt Place is a good place to chill with your friends, work in quiet or have a casual work meetup with some Blue Mountain Coffee.